In July 2003 we decided the time had come to head out of Los Angeles for a few weeks. San Francisco beckoned and off we went.

We left Marina del Rey and headed north to Santa Barbara. Becalmed going around Point Mugu, it seemed as though the trip was going to take quite a while. Not being purists though, we finally fired up the engine and continued on our way.

As night fell, Gemma faced her first night passage. We had agreed to do a two hour rotating watch and so as Carl went below to try and sleep, it was an interesting experience to head into a busy shipping channel with enormous container ships, oil platforms, navigation lights and more. Hitting nothing (but having woken Carl several times to check) we rotated watches and made it through the night, arriving in Santa Barbara at dawn where we dropped anchor and enjoyed a few hours sleep.

The weather forecast looked good despite a quick torrential downpour so we decided to continue north and head around Point Conception, an area known for its rough seas and unpredictable conditions. As night fell, 20 knots of wind was on the nose and the twelve foot seas were large. Indigo Moth rose majestically over the crests and free fell heavily into the troughs of the waves, burying her bow in green water before rising clear, the spray flying into the cockpit. Coming on board for her watch, Gemma looked at the churning white water around the boat, the endless darkness, the pitching boat and thought, "We're so dead." After fifteen minutes on deck however, it appeared this was not the case which was a good thing!. Indigo Moth is built for offshore sailing and feels as sturdy as a rock. Once this was apparent, things were fine. We continued round the point for most of the night, riding the rollercoaster of waves and at times, even enjoying the excitement!

The watch rotation worked well although two hours seems like a very short time to sleep especially when there's no love lost in waking the other crew member to take over. Two hours on the dot and that was it; up and alert, on with the fleecy thermals, foul weather gear, life jackets, harnesses and back on deck. If we were feeling particularly generous, we'd put the kettle on for the person going on watch to make tea!

We sensed our approach to San Francisco as the fog settled in early on our fourth day. Radar was essential and we watched the line of tankers accumulate around the mouth of the golden gate waiting for the ebbing tide. We kept our distance and made our way in. Finally looming out of the fog we could make out the great vertical supports of the Golden Gate bridge. Closer and closer until eventually with great excitement, we sailed underneath and could truly appreciate the sheer enormity of the bridge; an overwhelming experience and a great start to our stay in the bay area. 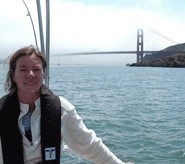