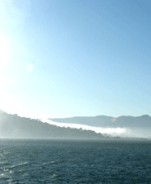 We arrived in Sausalito after three and a half days of offshore sailing. We were tired but appreciative of the beauty of the area.

Arriving at the marina, we were given a slip at the end of possibly the longest dock in the universe. In order to go ashore to use the facilities, one needed a good fifteen minutes advanced warning which is not always possible for anyone with a fast metabolism! When in a marina or on a dock we try to avoid using the holding tank as it means we then have to go out and empty it. Things were fine until the night Winston suffered a stomach upset...

Not long after we arrived in Sausalito, we spotted a pretty boat with a dark red hull returning from an afternoon sail. We noticed she was flying the British ensign and so we waved even more enthusiastically and received a cheery wave in return. Shortly after, Ian arrived on the dock to say hello in person and within minutes of meeting, he'd invited us to dinner at his home and would come and pick us up as we were without transport.

We were intrigued and delighted to receive such a spontaneous invitation and we trusted our instincts. Ian and his wife, Jen turned out to be the highlight of our summer sojourn in Sausalito.

Ian is a British Master Carver, of whom there are very few. We realised this was a chance not to be missed and so we signed on for a two day class to learn some of the basics. Carl had always wanted to learn to carve and took to it immediately, creating an excellent acanthus leaf and becoming quite proficient in the meantime. Gemma however, struggled away with the mallet and chisel and at the end of the two days felt that Ian had produced a very good leaf indeed! For more about Ian...

Ian and Jen had an African Grey parrot named Stella. We were fascinated with Stella as she could imitate almost everything with excruciating accuracy. Ice cubes dropping into a glass were one of her specialties, some of Ian's early morning habits we could have done without!

Sausalito is a beautiful part of San Francisco, strangely immune to the fog bank stretching across the bay but with great variations of temperature of its own. Our views were spectacular, stretching right across to the city. We watched the fog cascade down the adjacent hillsides and reflected on how different it was to Marina del Rey.

Carl's good friend Adam joined us one Sunday for an afternoon of sailing on the bay. San Francisco bay is sailing at its extreme. From zero to 40 knots and back to zero again, it certainly keeps you alert. We sailed around Alcatraz and over to Tiburon to look at million dollar estates clinging to the cliffs. Returning to our slip, we enjoyed an afternoon relaxing in the sunshine before Adam departed, leaving us with a future invitation to dinner at his home near Palo Alto.

Six weeks in Sausalito passed quickly by. Winston added to the excitement by managing to antagonize a skunk and was well and truly doused. The tomato juice theory is a myth as we discovered, having bathed him in gallons of the stuff late one night. We ended up with a red dog who smelled very strongly of skunk with an Italian flair. Eau de Skunk lingered on unpleasantly for several weeks. We finally found a product named appropriately 'Skunk, Off!," which we swear by and would highly recommend for anyone facing a similar dilemma.