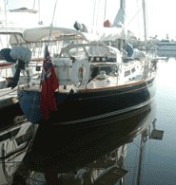 Arriving in Ensenada we were greeted by Carl making cocktails, Kahlua is very cheap in Mexico and if mixed with rum and milk really does make an excellent drink. It seemed like a good idea at the time. After cocktails Carl managing to sear his fingertips on the new super high-tech LED light bulbs and then we headed off into town to enjoy an evening of tacos and tequila in Ensenada.

A little worse for wear, the next morning was spent having breakfast at the local cafe we frequented. Alfonso's provided the remedy (Huevos Mexicana consisting of scrambled eggs with tomatoes, onions and green jalapenos, the colours of the Mexican flag) and lots of coffee. Following breakfast it was in search of Bloody Mary's we headed, soon to be found in the main tourist area. Enormous glasses of Bloody Mary with what looked like lumps of meat floating in them soon arrived. We were assured that these were chunks of dried fruit but not convinced we dumped our lumps of meat into Carl's glass, much to his disgust as he returned from shopping having successfully bought a pair of shorts three sizes too small.

Moving on we strolled through the fish market (perhaps not such a good idea), bought fresh prawns and watched the obese sea lions beg for fish. The noise was deafening and the smell of fish, pungent to say the least.

As we walked along the malecon or breakwater, Carl spotted a large group of birds, pelicans and seagulls on the water at the bottom of a boat ramp. Letting Winston off his lead, we stood back and watched, thinking that Winston would simply run to the edge of the water. Of course Winston plunged into the water and swam out towards the birds. One by one they took off until the last remained. Winston swam towards it and we realized that the bird was crippled and couldn't fly. Eventually Winston reached it, attempted to bite it, the bird pecked back, we shouted at Winston, the park keeper's whistle blew and he limped rapidly towards us. Gesturing angrily towards a sign he bombarded us in Spanish and we realized that dogs were not allowed on the malecon, dogs were not allowed in the water and dogs were certainly not allowed to eat crippled seagulls. Oops. The bird was fine, Winston was back on his lead, we tried to apologize and we headed back to the boat. Enough excitement for the day.

The weekend in Ensenada continued with a fantastic lunch overlooking the ocean at La Punta Morro. Fabulous views, incredible food and excellent wines, Catherine and Tony decided that another night in Ensenada wouldn't be a bad thing and they could just as easily leave the next morning.

Having enjoyed some of the local wines we decided to visit the winery at Chateau Camou. Driving along unfinished roads, clouds of dust obliterating the view we started to think perhaps it wasn't such a good idea but we eventually stumbled on to the right road and drove up the driveway to the winery.

A white-washed Spanish-style building housed the barrels and when we were finally able to clarify that we wanted to take the tour which included the good wine, it was amazingly cool inside from the thick stone walls. The wine was delicious and we decided that it would be a good idea to buy a case or two.

Two Spanish classes, a few glasses of wine and it's amazing how one's language skills improve. When the negotiations became confused, Gemma very confidently stepped forward to take control of the situation. Panic overtook and in a very Monty Python-esque scenario (Burma for those who know), the word vino popped out and nothing else. Of course, that may have been enough, after all we were in a winery and obviously buying wine (trying hard to justify it!) The details were worked out eventually in loudly spoken English and hand gestures, the universal language! 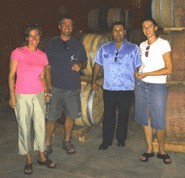 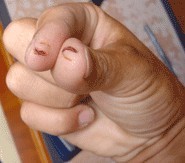