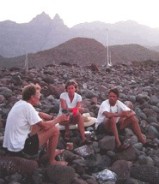 Having spent several weeks in the Puerto Escondido area due to frustrating equipment failure, we really got to know the area well. We were also lucky enough to meet Steve and Claudia on Naiad, who shared their margarita recipe with us, sold us the Breeze Booster (our most prized possession) and kept us sane. Carl feels he has now surpassed the master and issued the challenge to Naiad for a taste-off when next we meet!

The advantage of Puerto Escondido and Loreto is the close proximity of several islands. Islas Danzante, Carmen and Coronados are all within an easy day sail and provide a wide variety of anchorages. We had spent several days alone at Isla Carmen, anchored in Bahia Marquer enjoying the clearest water we?d seen. Due to the clarity of the water we developed a new activity called Virtual Snorkelling. This is a fantastic sport for anyone who loves looking at fish but just can?t be arsed getting wet. Vastly more exciting than an aquarium at the dentist, virtual snorkelling involves taking one's dinghy out early in the morning (preferably before the wind picks up) and anchoring over a nearby reef, then just sit back, relax and enjoy the activity below.

It was while we were pursuing this new found sport one morning that we had an amazing encounter with a manta ray. We?d been confused previously having seen two fins basking on the surface, one silver and one black, not a dolphin and certainly not a shark. Finally at Isla Carmen we realized that these were manta ray fins, the silver being the underside of the ray. That morning we saw a five foot wide manta ray a few feet away from us and approaching slowly we were able to follow the ray as he looped and flew through the crystal clear water just beneath us. Standing up in the bows of the dinghy we were able to take some of the most amazing photographs that truly captured the flight of the manta. In fact, had an accident not happened later in the day, this part of Notes from the Boat would have been entitled "Oh my Manta." While we discovered the hidden beauty of Bahia Marquer beneath the water, we soon discovered the downside above the surface as within minutes we were inundated with bees. At first, to our horror we thought they were swarming around the boat, then as we watched them commit suicide by diving into Winston's water bowl, we realized they were thirsty. We were inundated and were forced to spend hours out in the dinghy or hiding below in the cabin. Luckily we had just bought the "Breeze Booster" from Naiad for the bargain price of two hundred pesos (about twenty dollars). This is a fabric wind scoop which forces even the most minimal breeze into the boat and so it made hiding from the bees tolerable.

Once we realized that the bees were simply thirsty we emptied out the dog's water, only took evening showers and tried to eliminate the presence of fresh water anywhere outside the boat. Carl then decided to try sluicing out the cockpit with a bucket of salt water to deter the bees further. As we have a salt water hose in the galley (very useful for washing dishes to save fresh water) he filled a container with salt water and was walking to the cockpit when just a little salt water slopped over the sides and landed on the keyboard of the brand new Sony Vaio 17" widescreen, extra bright, super cool laptop. It died instantly.

The irony was that the computer had crashed earlier in the day and Carl had spent hours working on it, getting everything running and prudently backing everything up. We then downloaded the manta ray photos and deleted them from the camera, unfortunately just before the incident with the salt water which meant they were never to be seen again. We can only hope to find another such obliging Manta Ray along the way.

Carl spent the next two days taking the Sony completely apart cleaning it to try and get the salt water out but to no avail and so we contacted Sony to find out that while the computer could be repaired in San Diego it had to be shipped from LA in a special box which would be shipped to us there. We tried to explain that being in Mexico we would have to pass through San Diego to get to LA to pick up the special box but the answer was the same. And so it turned out that a trip to Los Angeles was in order. We returned to Escondido, rented a car and Gemma left for LA the following day. Gemma flew to Tijuana, took a taxi to the border, walked across the border, jumped on the trolley into downtown San Diego, took the train from San Diego to Anaheim meeting Catherine at the station and then drove to Marina del Rey, picked up the special box and shipped the computer right back to San Diego!