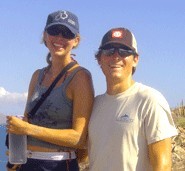 We were anchored at tiny Isla Coronados where we'd headed in search of a breeze when we encountered a little more breeze than we'd anticipated. Our second chubasco (the seasonal Mexican squall) came ripping through the cabin at a brisk forty knots and we followed the now usual procedure of getting up and making sure everything was battened down. Followed closely by lightning and torrential rain, we started the engine and motored into the swell to relieve the strain on the anchor chain. By 3:30am things had started to calm down and we were able to go back to sleep for a few hours. While certainly not blasÃ© about the weather, we've come to recognize the warning signs, looking at the clouds every evening for an indication of something heading our way.

Following our second chubasco, we heard the news that a 45 foot wooden sailing boat named Water Witch had gone aground on Isla Carmen and while her crew was safe on the beach, the boat couldn't be saved. Another boat, Why Knot? also went aground luckily though, no one was hurt and only a little damage sustained.

We had been talking to a boat named Ventana during the storm and a couple of days later they arrived and anchored next to us. Chris and Julie are a couple in their mid twenties who are sailing around the world on a shoestring. Their boat, Ventana is twenty eight and a half feet long (very important to get the extra 6 inches in), they have a composting toilet which requires peat moss to be added to it (best not to ask for details) and every inch of their boat has been utilized. It was impressive. After spending an evening aboard Ventana enjoying tiny steamer clams we had collected together, we returned to the forty four foot Indigo Moth feeling like we were living aboard The Ritz.

We went on to spend the next week with Ventana as we sailed north with them from Isla Coronados to San Juanico and La Ramada where we hiked to see the supremely disappointing Cruiser's Shrine. Cruisers to the Sea of Cortez make a pilgrimage to this area and leave items with their boat names behind as a testimony to their adventurous spirit. Having searched high and low for a picturesque shrine we finally found a tree strewn with strands of paper and fabric, carved pieces of wood, shells, wine bottles and a turtle shell. We resisted the urge to leave an Indigo Moth t-shirt or similarly inscribed item and headed back to La Ramada where we enjoyed the day's excellent catch of Spanish mackerel.

Departing La Ramada we decided to make the fifty mile passage to Bahia Concepcion. Ventana was heading the same way and we were able to maintain radio contact as it turned out the weather forecast was not what we'd expected and we felt the effects of a thunderstorm at sea. The wind picked up to a good 40 plus knots and then swung around from the north, the temperature dropped dramatically (or at least it felt like it did as we were still reading 90 degrees in the cabin), lightning was actually striking the water and the rain started pouring down. It was exhilarating and for the second time in a week, the boat was washed clean with fresh water!

We bid farewell to Ventana as we left them in Bahia Concepcion about to hitch hike to Mulege having run out of peat moss for their composting toilet, disastrous news. We offered to ask Catherine and Tony to bring some down from LA when they came to visit and so we returned to Escondido for Carl's trip to Los Angeles. 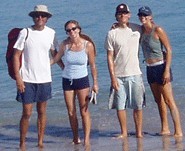