Winston has been surviving life in the Sea of Cortez remarkably well and has cultivated a new look we like to call Mexican Mange. As we've mentioned previously he has become an avid fisher dog and likes nothing more than fishing with Carl; he follows the cast of the rod, alerts Carl when there are good fish in the offing and likes to take first bite of the catch as it is reeled in.

Winston spends a great deal of time in the water as he pounces on unsuspecting fish in the shallows and it was with great luck and absolutely no subtlety that he finally stunned a puffer fish by jumping on it. Puffer fish have no defense other than to blow themselves up in to a spiky ball which renders them unable to swim and they must then rely on their fearsome appearance to deter their predators. Confused by this, Winston put his head down to have a closer look and starting barking underwater, quite a feat indeed!

In order to keep him cool, and keep the amount of dog hair to a minimum, Winston recently had a hair cut. We brought some dog clippers along for the purpose and Carl shaved him while we were up in Bahia Concepcion. The clippers leave a nice ridged finish reminiscent of... yes, Winston now looks like he is wearing corduroy trousers! 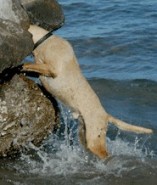