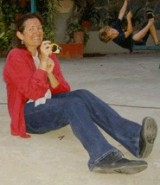 After a week in Zihuatanejo it was time for Gemma to return to the States for a couple of weeks to squeeze the Pig and do some work. The first children's picture book was sent out to publishers and we've got our fingers and toes crossed that someone decides to publish it and develop the rest of the potential series.

In the meantime Zihuatanejo was gearing up for the second annual International Guitar Festival. Musicians from Canada, the States, Mexico and beyond were converging on the small town to play guitar, dance and sing into the wee hours.

Carl, along with Steve and Claudia (our friends onboard Naiad) become the groupies of Guitar Fest, attending almost every event and staying up most nights until 5am. It was terribly hard by all accounts and Carl was even spotted dancing on one occasion! Copious amounts of tequila were consumed in order to survive the ordeal and even this hard-core trio was struggling on more than one occasion.

Also featured were Gypsy, a Latin American trio from Canada, Goh Kuorsawa, Jim McComick and many more. The music was varied and talent fairly oozed from Zihuatanejo as the town jumped and danced non-stop for a week.

Gemma returned at the end of the week to reign in the chaos which was probably just as well as severe liver disorders were starting to make themselves known. Arriving in time for the final concert and appreciating a little of what had been enjoyed throughout the week, it was a magical evening.

Steve and Claudia presented us with a gorgeous set of personalized tequila glasses to commemorate the event, the engraving looking like something done with a rusty nail, gift-wrapped in newspaper; we will treasure them forever!