Before leaving Zihuatanejo we met up with our friends, the Nash family. Bill, Nathalie and the kids were on holiday in Ixtapa and we were able to spend a fantastic evening with them at La Cala; a terraced restaurant nestled above a small cove where waves surged and broke onto a pebble beach below. Candle-lit tables clustered precariously around the edge of the cove to fully absorb the ambiance (and probably a lot more in rough weather). A brave turtle briefly popped his head out before being engulfed again rapidly and a resident (possibly suicidal) crab in the restaurant provided great excitement for the kids. In addition to the atmosphere, the food was sublime (in particular, an excellent tuna carpaccio) and we'd highly recommend eating at La Cala at Puerto Mio if you're ever in this part of the world.

To add to our enjoyment of Zihuatanejo we were able to join David Ferguson, a longtime family friend, for dinner at his wonderful hotel, La Quinta Troppo. David enjoys a lifestyle which we can but envy as La Quinta Troppo sits above one of the most beautiful bays in the world. Windows are unnecessary and it's an incredible feeling to sit in David's open apartment, a large palapa roof overhead and nothing else (no walls, no windows) to distract from the sunset, the bay and the wafting breeze. We were delighted to join David on the terrace below and experience some of Zihuatanejo's finest cuisine, only available to guests of the hotel (how cruel) but then again perhaps you'll just have to go and stay there to fully appreciate the delights of La Quinta Troppo!

After several farewell dinners, including a vast banquet prepared by Claudia, we reluctantly bid farewell to Zihuatanejo. Hurricane season is again approaching (could it be possible that it's almost a year since this adventure began?) and we need to head south to the relative safety of El Salvador and Costa Rica. A familiar theme, we raised the anchor and waved goodbye (or hopefully adieu) to a place we'd fallen in love with and we set off on a three day passage to Huatulco, our final Mexican destination before heading across the dreaded Gulf of Tehuantepec, the isthmus at the bottom of Mexico where winds maintain an average of Force 6 and fear breeds fear in the boating community...Will we survive without mishap?...Only time will tell! 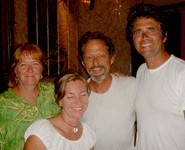