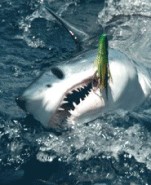 After leaving Agua Verde we set off on a five hour sail, immediately flew the spinnaker and were going along at a good speed. Supplies are very limited in Baja and we've now started referring to the times we sail as the number of hours of fuel we've managed to save. It's a good way of looking at things and certainly makes us enjoy the sailing. As is typical when we're underway, a fishing line with the latest lucky lure was deployed off the stern. There have been a number of lucky lures to date, unfortunately many of them (possibly not so lucky) are swimming around in the Pacific Ocean having been eaten on the way up to San Francisco last summer. So far in the Sea of Cortez we know of one exceptionally large Dorado sporting a lucky lure and several large barracuda around Agua Verde are wearing this season's must-have accessory, the silver spoon (this may not be the official term for this type of lure but anyway, the story continues...)

After a couple of hours there was a strike and what seemed like hundreds of feet of line whizzed off the rod. Excitement was high, the moment tense (this is sounding familiar). We headed into the wind, dropped the spinnaker, alerted the nearby boat as to why we'd suddenly veered off course and started reeling and reeling and reeling. After about twenty minutes a fin appeared. Carl was tiring, Gemma was armed with the camera ready to take head shots, Winston was on fish alert. Suddenly we saw teeth. Rows and rows of sharp white teeth and we realized to our horror that we'd hooked a shark. It was about five feet long (or even more) and heavy, at least a hundred pounds surely. Carl was able to bring it alongside the boat where we were able to photograph it. It wrestled and thrashed in the water keeping one expressionless black eye on us and especially on Winston, the lucky lure dangling tantalizingly out of its horrific mouth. Carl, in a calm somewhat surgical manner called for his long-nosed pliers and sailing gloves as he was going to attempt to retrieve the lure. Gemma brought the required items and threw in her two cents worth about how the bloody gloves weren't going to stop the bloody shark from biting his bloody hand off, in a calm somewhat surgical manner herself. Then as the shark realized the predicament above, it decided to resolve the situation and dove under the boat taking the line and lure with it. A strange sense of dÃ©jÃ  vu settled over us as we realized that at least this time, the rod hadn't snapped!

The excitement over momentarily, we continued on our way heading north. Pods of pilot whales fed lazily (or they may have been large dolphins,) the wind blew us lightly along and we looked around at the brown arid countryside surrounding us. Baja California is one of the least hospitable pieces of land we've seen. Rugged impassable mountains tower up from the water with no sign of life anywhere to be seen. Islands are dotted periodically through the sea but as Carl said, "Once you've seen one dry, brown barren island you've seen them all!" It's beautiful in an incredibly harsh way and everything seems larger than life.

Approaching Puerto Escondido we toyed with the idea of anchoring in a nearby cove but decided at the last minute to stay with our original plan and so headed into the bay. Puerto Escondido is a large natural harbour with signs of development from about twenty years ago. There are street lights and paved streets crumbling away into the earth but strangely, no houses. Later we discovered the developer had run out of money and things were left as they were. Coming into the main mooring area we noticed that although there were a number of boats, most of them were closed up and moored unattended for the hurricane season. The whole area had the feel of a ghost town. We finally found one boat with people on board who very kindly helped us pick up a mooring buoy and then we settled into our routine of putting up the large sun shades which cover most of the boat, having a quick swim and preparing to go ashore.

A few hours later as the sun was setting over the surrounding mountains we noticed a small patch of cloud appearing and it looked like rain. We'd had several false alarms in Agua Verde so we weren't too concerned. Chubascos are local conditions which are impossible to predict but often involve winds up to 70 knots coming down off the mountains. We went to bed with little regard for the lightning appearing on the horizon as we knew, of course, it wasn't going to hit us.

We awakened suddenly as a large gust of wind from nowhere ripped down the wind scoop which funneled air into the cabin below. We were up and outside before we knew what was happening. Violent gusts of wind lashing the boat, streak after streak of lightning illuminated the sky and showed boats swinging madly on their moorings. Thunder started to rumble ominously overhead. We dashed forward and started collapsing the sun shades. Large semicircular shades with tent poles assembled form a funnel for wind and create shade for us when we're at anchor. Rated for 30 knot winds we had no way of knowing what was heading our way so the first thing to do was secure the shades. With everything topside secure and all the hatches closed we made tea, sat down and waited for the storm to hit. By about 1am we were in the midst of it. The lightning was like nothing we'd ever seen as giant jagged streaks whizzed though the sky and finally, finally the rain came. After the weeks of heat it was with a huge sigh of relief, rain washing salt from the decks, from our hair, from our pores. Carl went round our unforgiving navy blue hull in the dinghy washing the salt streaks off. Finally at 2:30am we felt the excitement was over and we slept.